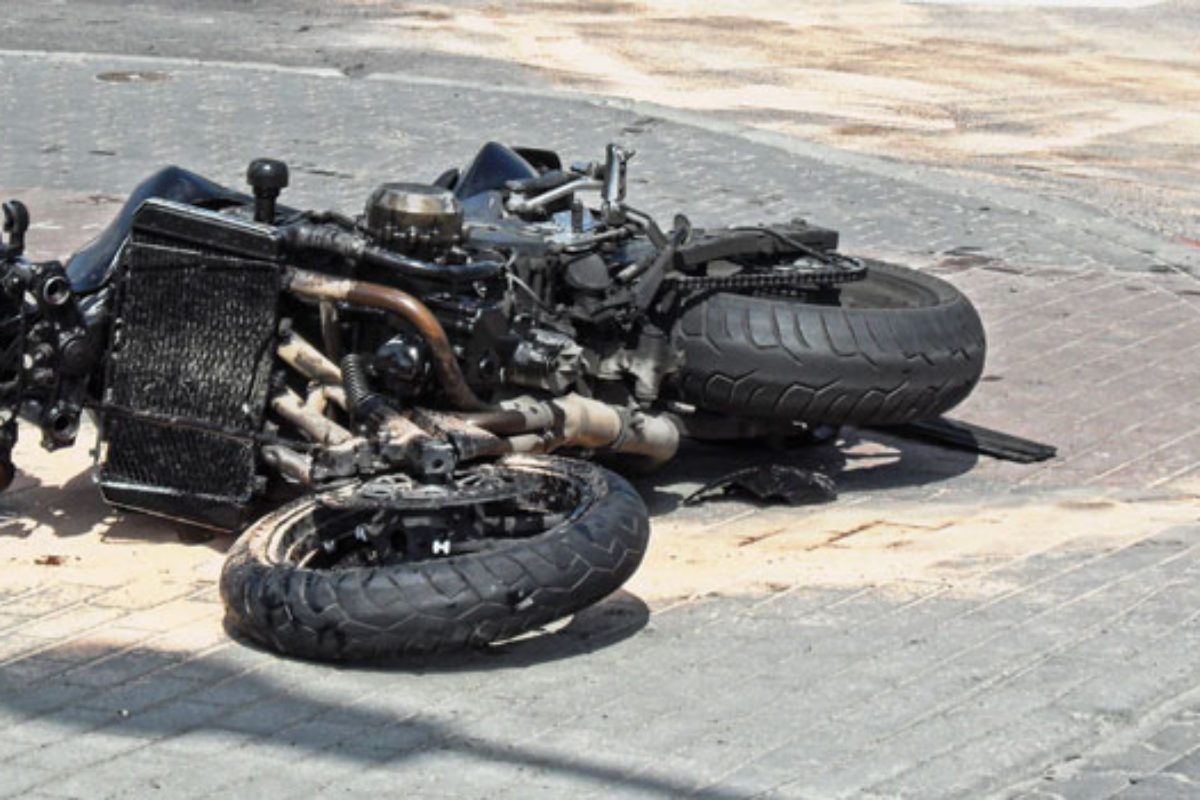 ccelerating his Ducati up the ramp onto I-95 on a bright sunny day in 2005, fellowship-trained spine surgeon Guy Scuderi could not know his life was about to change forever. To avoid the boneheaded pedestrian strolling on the interstate ramp, Scuderi dipped the yellow rocket to the left into what those who haven’t experienced it call “a controlled slide.” Scuderi then saw his surgical career of eight short years disappear with the skin from his hands and the bone of his right kneecap. Return to the work he loved seemed impossible.

What followed was a year of living with pain, enduring multiple surgeries to repair his hands and patella, and twice daily Silvadene cream applications to subdue the road rash. The forced inactivity allowed Scuderi’s active mind to turn to a particular riddle that had frustrated him in his practice. Where, precisely, is the location of pain?

When an entire category of surgical intervention is based on subjective patient reporting, then how scientific can it be?

Where, Precisely, Is Back Pain?

It has now been eight years since the accident. Asking that deceptively simple question during his recovery led Scuderi to morph from chronic pain patient, to researcher, to entrepreneur and back to surgeon. Along the way, he experienced the highs and lows of hope, success and even failure.

Today his research firm (Cytonics Corporation) has a biomarker assay for pain which, in turn, attracted an investment from a Fortune 500 firm.  And last month, at the Orthopedic Research Society (ORS) Annual Meeting in San Antonio, Scuderi unveiled an autologous therapy for osteoarthritic pain.

How did this unexpected journey to entrepreneurship happen? More importantly, has Scuderi and his team found THE answer?

An Unexpected Journey to Entrepreneurship

Scuderi began his quest to find the elusive pain generator with the assumption that there must be some compound that appears in the degenerative cascade with the pain (after all, chondral degeneration from OA [osteoarthritis] or DDD [degenerative disc disease] at some point becomes painful). And if such a biomarker could be located, could it then become a “pain test” which would locate the real source of the pain?

To start, Scuderi looked at synovial fluid samples from as many volunteers and friends as he could find: those with back pain, knee pain, no pain; colleagues, employees, even family members at his youngest daughter’s third birthday party. Like most researchers, Scuderi’s early experiments failed. His first published paper in 2006 described those early failures but one reader, Dr. Jason Cuellar, a Ph.D. spine researcher and medical student at Stanford University Medical Center, was intrigued and suggested certain refinements for the experiments.  Additional scientists and clinician researchers on both coasts joined the effort and the quest was on.  Scuderi’s co-investigators include the Scripps Institute, Carragee, Vaccaro, Golish, Anderson, and other noted clinician-researchers.

But Scuderi needed even more skills and more help to tackle this difficult problem. Starting Cytonics in 2006, he raised funds from friends and family made two key hires: a president and an experienced R&D leader. This team of three created a specialty cartilage research lab focused on biologic solutions for chronic musculoskeletal disease like OA and DDD. The focus of the five Ph.D.s and the other researchers and clinicians is to understand the links between cartilage degeneration and pain better than anyone and attack those links with biologic solutions.

While many firms research and develop ways to regenerate damaged cartilage, Scuderi and his Cytonics’ team of proteomics and biochemical scientists re-defined the question to focus on cartilage degeneration and the phenomenon of pain cascades. Changing the question pushed the team to look past the biology and more directly at pain’s chemistry.  That, in turn, brought the team to fibronectin-aggrecan complex (FAC). FAC is a cartilage breakdown material that exists in painful discs and joints but not in asymptomatic ones…a compound that Scuderi stubbornly believed must exist.

Could FAC be the skeleton key to finding the pain generator, stopping the pain or perhaps, even interrupting the disease cascade itself? Maybe.

It’s now been four years since Cytonics published its first diagnostic tests of FAC. Many more tests have followed. But, as every physician knows, first you diagnose, then you treat. At this past January Orthopedic Research Society Meeting in San Antonio, Cytonics introduced its first therapeutic program—the Autologous Platelet Integrated Concentrate (“APIC”).

APIC is an autologous treatment for pain and degeneration associated with any chondral injury, osteoarthritis, for example.

Cytonics’ APIC’s system concentrates platelets, growth factors but, unlike PRP (platelet rich plasma), also certain protease inhibitors from the patient’s blood. In a poster presentation at this past ORS Cytonics showed that APIC appeared to prevent FAC and other cartilage degenerative compounds. From the podium, Dr. Cuellar offered evidence that a platelet rich, leukocyte poor APIC also slowed the progression of OA in preclinical models, and that a cell-free APIC had a chondroprotective affect in rabbits in an ACL tear model.

Cytonics’ research has generated 15 articles in JBJS, Spine, Arthroscopy and other peer-reviewed journals but has gone relatively unnoticed as the company wrestles with the sometimes incompatible goals of building strong IP through robust (but sometimes secretive) scientific evidence to build value—versus promoting their findings to create a clinical following as market launches approach.

Scuderi, however, is resolute: “Musculoskeletal pain is often due to a biochemical inflammatory cascade independent of anatomical abnormalities.  MRI identification of variations in anatomy can lead to unnecessary and risky treatments including steroid injections. Payers have made it painfully clear to surgeons that they believe this to be the case.” The team seems to have filled in some important pieces to the puzzle by finding the new FAC protein complex that is both a byproduct and an agonist in the degeneration/pain cascade…and then creating ways to stop its production.

A research team at Rush Medical Center in Chicago led by Dr. Anne-Marie Malfait gained national visibility when they found a link connecting a degenerative biomarker, MCP-1, with pain behavior in a rat OA model (Eureka! Rush Researchers Find Breakthrough in OA; OTW, Jan. 3). This paper, presented at the National Academy of Sciences in December with a summary broadly distributed to outlets nationwide, repeats and reinforces observations made by Scuderi’s group over several years in clinical settings.

Cytonics first identified elevated MCP-1 (monocyte chemotactic protein 1) and other proteins in the synovial fluid of the knees of patients with cartilage damage and knee pain, when compared to normal volunteers, and presented the results to the Orthopedic Research Society in 20081. They further showed that the levels of these molecules performed as well as MRI in the prediction of intraoperative findings. This study, along with subsequent human studies that were published in peer reviewed journals demonstrated elevated MCP-1 in meniscal injury in the knee2, anterior cruciate ligament injury in the knee3, articular trauma to the ankle4, and disc pathology in the cervical spine5. In fact, these insights into the relationship of MCP-1 with painful states in cartilage injury lead to a utility patent that was granted in May 2010.

Naturally Scuderi is a big fan of Rush’s research: “This is great! Their efforts should be applauded for the rigorous scientific endeavor and results in developing an animal model for pain in cartilage injury. Indeed, Malfait’s et al. results in a mouse model of arthritis appear consistent with what we have observed in humans with cartilage injury and further validate our observations and conclusions.”

In Cytonics’ research, MCP-1 was only one of several molecules that correlated with cartilage damage pain, and, in fact, the best correlation was with the fibronectin-aggrecan complex6, which may also play a role in the pathogenesis of joint pain. The Cytonics FACT (Fibronectin-Aggrecan Complex Test) diagnostic assay is now making its way to the market.

Has Scuderi Found a Holy Grail?

The possibility that a physician could diagnosis and treat effectively, routinely and cheaply one of the most common scourges of mankind—chronic musculoskeletal pain—may not be out of this world. Indeed, Cytonics may well represent the next generation of successful musculoskeletal companies—one that is based on biologic solutions. In Cytonics’ case, the solution led to both a revolutionary diagnostic test and an equally disruptive treatment plan.

Meantime, Scuderi and his team are shaking the various money trees to fund their evolution from start-up to clinical commercialization.

In retrospect, the old saw “that which doesn’t kill you makes you stronger” proved uncannily accurate for this extraordinarily talented physician, entrepreneur, provocateur and one time motorcycle enthusiast.